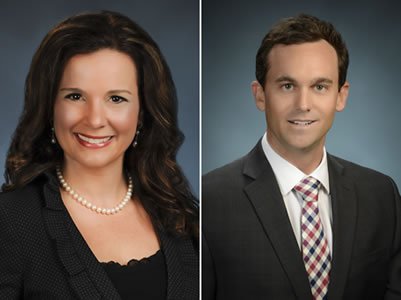 For the fifth consecutive year, Super Lawyers, part of Thomson Reuters, has selected Sarasota real estate attorney Nancy Cason to its 2016 Florida “Rising Star” list. She was first selected to the Rising Star list in 2012. Ms. Cason is a partner of the Sarasota law firm Syprett, Meshad, Resnick, Lieb, Dumbaugh, Jones, Krotec & Westheimer, P.A. Her colleague at Syprett Meshad, associate attorney Derek Eisemann, who received his Juris Doctorate in 2011 from Barry University School of Law, was also selected to the list. Only 2.5 percent of lawyers in the state are selected for the Rising Star honor. Both Ms. Cason and Mr. Eisemann are listed in the June issue of Super Lawyers Magazine.

Lawyers selected to the Rising Star list have attained a high degree of peer recognition and professional achievement. Super Lawyers rates attorneys nationwide through independent research, as well as peer nominations and a statewide survey of lawyers and peer reviews by practice area.

Ms. Cason holds the AV Preeminent rating, the highest possible rating from the Martindale-Hubbell Peer Review Ratings. Earlier this year, she was re-appointed by Governor Rick Scott to a second term serving on the Twelfth Circuit Judicial Nominating Commission, and last year, in 2015, she was recognized by Legal Aid of Manasota for her pro bono legal service to those in need in the community. Ms. Cason joined the firm in 1998 and was made partner in 2006. She has previously served as a Managing Partner of the firm, and is a current member of the Sarasota County Bar Association Board of Directors, holding the position of Treasurer. She was awarded her Juris Doctorate degree, with high honors, in 2002 from the University of Florida Levin College of Law.

Mr. Eisemann, who joined Syprett Meshad in 2013 as an Associate Attorney, focuses his practice on representing plaintiffs in all aspects of personal injury matters, as well as other areas of civil litigation, including real estate. He is a member of the Sarasota County Bar Association, serving on various committees in the Young Lawyers Division He took his undergraduate degrees from Florida State University, graduating in 2005 with a Bachelor of Arts in both Risk Management /Insurance and Real Estate from the school’s College of Business.