Syprett Meshad attorney John D. Dumbaugh has been recognized with the Legacy Award 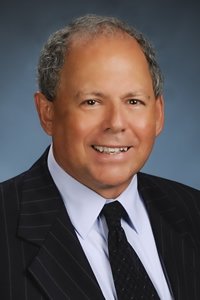 by Habitat for Humanity Sarasota. Attorney Dumbaugh received the award during Habitat’s December 8 annual banquet held at Church of the Psalms. Habitat Executive Vice President Fred Scheerle presented the award to Dumbaugh in honor of his 20-plus years of service to the organization, service which includes providing pro bono legal services to new homeowners and serving as a Board Member and Recording Secretary.

“It’s been a privilege for me to work with Habitat for Humanity Sarasota to help fulfill the dream of home ownership for members of our community who have had limited options or resources for housing,” said Attorney Dumbaugh. In addition to providing new homeowners with title and closing services, Attorney Dumbaugh has assisted Habitat with legal aspects of several subdivision developments, including Lime Lake, Jordan’s Crossing, and Beacon Place, as well as in the acquisition of properties, and other legal matters.

“In 1991, I heard a speech about the Habitat mission and the local chapter, then called Manasota Habitat for Humanity. As a real estate attorney, I knew I could make a valuable contribution to Habitat’s vision for growth,” said Attorney Dumbaugh. “It’s been a wonderful opportunity to be of service, and I am deeply honored to receive the Legacy Award.”

John D. Dumbaugh is Florida Bar Board Certified in Real Estate Law and has practiced real estate and estate law in Florida since 1974. He joined Syprett, Meshad in 1982 and became a partner in 1984. Fluent in German, he has served as a referral attorney to the German Consulates in Miami, Florida, and Atlanta, Georgia. He is admitted to practice in the U.S. District Court, Middle District of Florida, and Florida State Courts.